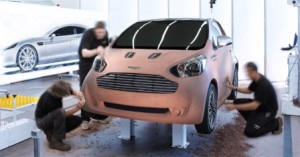 My dream of owning an Aston Martin may, at least, become attainable – not because I’m on the verge of signing a huge recording contract (wish!!) – rather, Aston Martin is planning to go from one extreme to another – with the introduction of a tiny city car.

The luxury car marque has announced it is to launch a £20k motor for the “urban traveller”, a far cry from the £100k or so usually required to get the keys for an Aston.

To be known as the Aston Martin Cygnet, the mini martin should be on sale before the end of next year. Based on the Toyota iQ, it is likely to continue to use the current petrol engines of 1.0 and 1.33 litres rather than the 5.9-litre V12 of the 190mph Volante.

The Cygnet, described as a “new luxury commuter concept” will offer Aston Martin luxury design in a car based on the Toyota iQ.

“Small is beautiful these days”, Ulrich Bez, the CEO of Aston Martin said. “We have to move on from the preconceived ideas regarding what Aston Martin is about”.

Not sure if I could see James Bond driving one though.