MiNew A10 ‘Under Tele’ Nettop 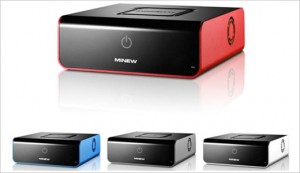 Akihabara News has just flashed up this little nettop from the Korea-based Moneual.

It is said that the A10 is designed to be used under a TV for “basic video purposes”.