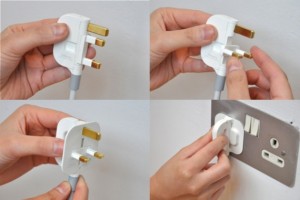 You know the simple things are generally the best.

This redesign of the good ol’ British three-pin plug trounced the competition that included a twin-seat electric aircraft to the late Alexander McQueen’s last fashion collection!

Min-Kyu Choi’s rethinking of the safe yet bulky, fuse packing, plug has won the 2010 Brit Insurance Design of the Year award. He seems to have ‘fused’ (sorry) the UK plug with the UK’s ‘love’ of flat-packs 😉

Let’s face it – the plug attached to your swanky hi-tech actually dates back to around 1946.

Choi, 29, designed the product during his Masters at London’s Royal College of Art after buying a MacBook Air and decided that the plug looked a bit chunky next to the sleek lines of the MBA.

By having the vision to rotate the bottom two pins 90 degrees so that they lie parallel with the static top pin he managed to crash-diet Britain’s 45mm thick plug to a lithe form measuring under 10mm.

Not content with his size 0 plug Choi has also designed an adaptor (see gallery below) that allows three of his plugs, or a USB plug, to fit into one power point, making our sockets and bags even more clutter-free. This guy needs to be Prime Minister and should become very rich if there’s any justice!

The winning design and all other short-listed entries are on display at the Design Museum, London, until 31 October.

Now – I challenge Marvell to squeeze a computer into that plug!