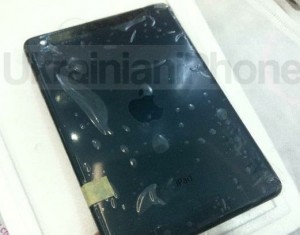 As the rumoured iPad mini launch date gets closer more whispers and photos of the newest Apple product appear in the blogosphere. The latest nibble is that Apple has millions of the diddy device on order.

As word that invitations for an iPad mini-flavoured event will be sent out this week news has reached me that Apple has ordered 10 million of the miniature tablets ahead of the official launch.

Everyone seems to be expecting an official announcement from Apple before the end of the month with the device hitting most people’s Christmas list.

Unfortunately there is also an expected shortage of mini Apple’s around the festive season – 10 million might not be enough to answer all those letters to Santa.

The information regarding Apple’s mass order has come from component suppliers to Apple in Asia, who have stated that they have been asked to make 10 million units of the smaller tablets in the fourth quarter for Apple.

The big question is, will the iPad mini follow the design of its larger stablemate or the new iPhone 5 (which I have a review handset so expect my feelings on the new Apple smartphone).