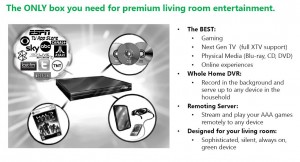 There are rumours that Microsoft may out a tablet soon, I think we all agree that its next-generation Xbox console wont appear this year. There is, however, a newly leaked 56-page document which sheds some light on the company’s plans for the “Xbox 720.”

The presentation appears to be from August 2010, and references future improvements like SmartGlass, a Metro dashboard, and Xbox TV apps. All this runs alongside its incremental Xbox 360 updates.

Microsoft outlines that the Xbox 720 would support Blu-ray, native 3D output and glasses, concurrent apps, and additional sensor and peripheral support – which all sounds plausible.

These developments would all be pushed along by a promised 6x performance increase which allows for true 1080p output with full 3D support and an “always on” state for the console.

The next gen console would do away with all other boxes under your telly as Microsoft would aim its Xbox 720 as being the only box needed for living room entertainment. This would be down to it providing background recording functionality for TV content and a unified Windows 8 foundation to make it easier for application developers to build apps that target Xbox, PC, and Windows Phone.

“In Kinect v2 we can continue to go beyond controllers and offer peripherals and accessories that heighten game immersion,” reads a note section of one of the slides.

Microsoft lays out a roadmap for its “Fortaleza” Kinect Glasses — which appears to be a research project the company is working on. There’s little mention of the hardware involved, but the glasses appear to be Wi-Fi- or 4G-enabled and incorporate augmented reality in a way that’s similar to Google’s Project Glass augmented reality glasses. Coincidence?

The Fortaleza specs are described as a “breakthrough heads up and hands-free device,” Kinect Glasses is marked as a 2014 product that won’t launch alongside the Xbox 720 console.

The leaked document has now been removed. Clicking through to Scribd (where it had been hosted) brings up the message that it was removed “at the request of Covington & Burling LLP,” an international law firm that lists Microsoft as one of its clients. But, at the time of this report you can still download the document here.

As much as I want this all to be true, the lack of security watermarks and Microsoft branding leads me to take this with quite a lot of salt.