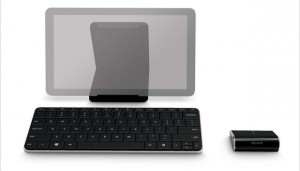 As I reported in the middle of last month, Microsoft has some rather nifty keyboards and mice on the way. Now I have the official low-down on the Wedge set and Sculpt keyboard.

It might seem a bit odd for Microsoft to be outing these peripherals that have been specially designed to go with its touch-friendly, tablet-loving Windows 8 software but, for anyone that uses their tablets for more than the occasional Facebook update or Tweet, sometimes touchscreens need a little help. Let’s face it, the Surface covers come with keyboards built in.

The Wedge keyboard and mouse (main picture) are quite the compact duo. The mouse is the length of your fingers but still has room for some neat design touches that may have Apple’s Magic Mouse thinking about a refresh.

That black stand you see in the main photo is actually a cover for the keyboard (as seen here).

The Wedge keyboard is equipped with Windows 8 hot keys and media buttons along the top row, there’s reasonably sized Ctrl, Shift and Backspace keys. The Enter key has been squished in to a single row job though.

The keyboard connects to your Windows 8 tablet using Bluetooth, and automagically turns on and off when you take the cover off or clip it back on. Clever, huh?

The mouse also connects using Bluetooth, powering up and down when the computer does and will be happy being dragged about any surface (within reason).

If you need a larger typing area then Microsoft’s ergonomic new Sculpt keyboard may be your thing. It features a “Comfort Curve design” which is said to encourage natural wrist posture thanks to its slight, six-degree curve.

Microsoft has also underline how its current Touch Mouse will work with Windows 8. The Touch Mouse lets you shortcut to various functions by doing various one, two or three-fingered gestures – are some of you making your own punchlines out there? 😀

In Win8, two-finger slides to the left will beckon forth the operating system’s ‘charms’, the common menu functions relevant to every app. Sliding right with two fingers will switch between open apps.

The Sculpt mouse is Bluetoothed up as well and includes a four-way touch scroll strip for navigating up and down, left and right, and swiping through windows and documents.

The new peripherals will be out “in the coming weeks and months” according to Microsoft, with the Touch Mouse updated when Windows 8 arrives on 26 October. The Wedge mouse will set you back $70 (£45), the Wedge keyboard $80 (around £55) and the Sculpt keyboard and mouse will both cost $50 (£35) each.