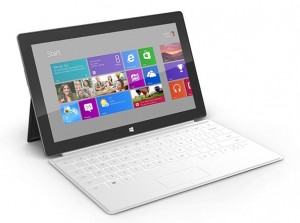 If, like me, you’re intrigued by Surface, Microsoft’s latest hardware offering, the deal breaker may well be the price when compared to the iPad and other tablets. Well, that very detail has been leaked.

Any hopes that Microsoft might create a coup and undercut the ever-popular Apple iPad have been apparently dashed.

The price for the entry model Microsoft Surface RT tablet will start at an wallet-pounding $599 in the US, while the Ivy Bridge-powered Surface Pro will set you back $999.

The RT is the one aimed at annoying Apple’s tablet which costs $499 in the US – a full $100 cheaper than the Microsoft Surface RT’s rumoured price.

Here in the UK the iPad starts at £399 which probably will mean the RT would be marked up at £499.

OK, £499 gets you one of those neat keyboard covers thrown in to the deal – but would you pay a ton for a cover?

Look, Microsoft has cash in the bank and would love to see the Surface make a dent in Apple’s monopoly so why not at least match the iPad’s price?

The iPad has all of those lovely apps and such and is so very in fashion.

What the Surface does do better than the iPad: Well, it has a USB port for a start. This means that you can easily share large files and documents, plug in a camera, USB microphone or any other USB thingy. Not only that – there’s the Display port too and Windows 8 is designed to work with any input. The iPad has zero support for mice, etc. Also Surface has a full version of Office baked in (not yet iPad)  – a bonus for students and mobile workers alike.

So, is it the price scaring you off or do you think that the extra £100 is a small price to pay for the extra functionality?