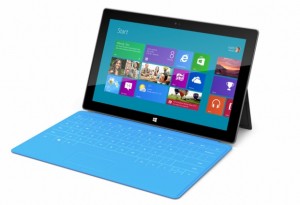 Microsoft has (finally) announced what is set to be one of its more significant hardware products! The Surface Tablet will be available as ARM-powered or Intel-based machines with varying specifications.

The Surface is Microsoft’s chosen moniker for its Windows 8 and Windows RT own-brand line of tablets.

They are all equipped with 10.6-inch screens, and have handy pop-out kickstands at the back.

Let’s have a looksee at what was spilled about the Surface at the mucho-secret get together.

There will be two main strains of Surface. A regular and a Pro.

The second Microsoft Surface Pro model runs Windows 8 Pro, and has an Intel Core i5 Ivy Bridge processor, as well as 64 or 128GB of storage. That hardware makes it a bit thicker at 13.5mm, and heavier at 903g.

As you’ve probably guessed having a Pro version means that the RT iteration misses out on things – for instance, it won’t have access to the full Windows desktop. Instead you’ll have a touch-friendly Metro tiled interface. The Pro version gets the whole job lot but, as with all ‘Pro’ things, is likely to be a heck of a lot dearer.

Microsoft is describing the regular version of their new tablet as boasting an ‘HD Display’ while the Pro edition has a ‘Full HD Display’.

To me that most likely points to the RT version being loaded with a 1,280×720-pixel resolution screen while the Pro tab should be boasting 1,920×1,080 pixels – or there abouts.

Microsoft would have to try a little harder, however, if they’re to taunt the new iPad’s 2,048×1,536 retina display.

The good thing is that the Surface’s 10.6-inch screen has a 16:9 aspect ratio – top notch for watching widescreen movie viewing without the black bars. 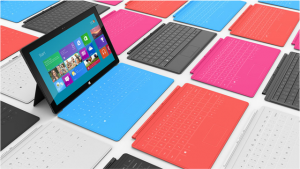 Surface has a choice of two covers in a range of colours. These attach magnetically and fold down to reveal a keyboard.

The Surface Touch Cover has a multitouch keyboard and trackpad. As Steven Sinofsky said when introducing the product, “typing is twice as efficient as typing on glass.” and is 3mm thick. The Touch Cover uses pressure-sensitive technology which “senses keystrokes as gestures,” which Microsoft claims will make for a faster typing experience.

It may seem like a minor difference, but where the Touch is an improvement over the standard capacitive touch keyboard, the Type Cover is a slimmed down version of a real keyboard with actual moving keys!

Steven Sinofsky says that the accessory has a full touchpad with clickable buttons, too. You do pay for this with the extra 2mm. 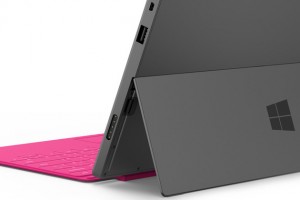 Whilst most of us were talking about looks, power, resolution, one gadget lover spotted something odd about the Surface.

The right side of Microsoft’s new tablet showed a USB port, a video output, a speaker grille, and an alien five-pin connector slot.

This could well be the new Microsoft power and data connector.

That patent application doesn’t give too much away but does mention the ports magnetic coupling to devices. The Verge reckons that Microsoft is on its way to creating a MagSafe competitor.

Microsoft’s keeping especially cagey about this bit. They do say that it’ll come with a competitive price tag. So, I’m expecting iPad prices for the RT here folks.

The ‘Pro’ version will be hitting the ‘Premium’ end of your bank account. Think about the Intel processor and more storage and you’re in Ultrabook territory, so I’m expecting a similar price tag. £700+ Ouchy!

But you’ll be able to run Photoshop and all that good stuff.

The basic Surface tablet will come out at the same time as Windows 8 itself, so Autumnish.

Microsoft has said the Pro version will follow approximately 90 days later, which could set it up for a Christmas launch.

Would you Surface rather than iPad or run an Olympic Iconia?