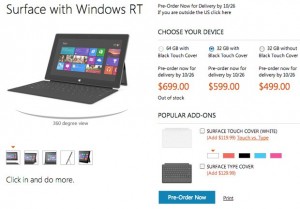 Microsoft has just revealed the pricing for its Surface tablet with Windows RT the operating system designed for low-power processors. There will be three different options available and pricing for the Microsoft Surface RT tablet starts at $499.

The entry level Surface RT Tablet comes with 32GB of storage and is priced up at $499. Add $100 and you can grab the 32GB Surface with the keyboard-packing Touch Cover for $599.

At the top of the pile is the 64GB Surface Tablet with Touch Cover $699.

Microsoft said that its Surface pricing would be roughly in line with the competition. The RT devices aimed at tablets and more powerful Windows 8 varieties coming in at prices more comparable to other notebooks and ultrabooks out there.

This pricing is indeed in line with Apple’s iPad, which starts at $499 and ranges up to $699 for the Wi-Fi-only versions.

Surface will be available beginning October 26, after a media event being held on October 25. With this latest snippet it appears that Microsoft looks to be ready to open pre-orders soon.

Don’t forget the Wedge and Sculpt peripherals which are also designed to be tablet friendly.