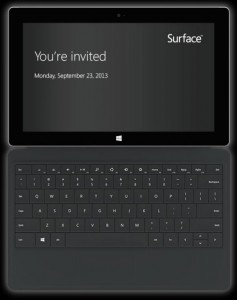 Microsoft has just sent invites to the media for a Surface launch event, so let’s hit the leaks and the rumours.

Microsoft’s Surface line seems to have been a bit of a tough ol’ nut to crack as it gatheres stiff financial losses and suffers from lower-than-anticipated unit volume.

This doesn’t mean that the big M is giving in as Microsoft is forging ahead with its efforts to build its own PC hardware and other devices as well as peddling its software.

Microsoft’s hardware dreams are not small, a firm show of this was its recent multi-billion-dollar purchase of Nokia’s smartphone business.

Previous reports have already claimed the Surface 2 will ship with Nvidia’s Tegra 4 processor, but it’ll also apparently have a 1080p display, 4GB of RAM and a similar form factor. Still, there are a couple of notable design changes: the tablet will offer an “integrated two-position kickstand,” and it’ll be available in white.

According to Neowin, the Surface Pro 2 will include the much requested dock.

The Surface Pro 2 dock is said to feature three USB inputs, allowing you to attach a keyboard, mouse, and other peripherals much easier. To the joy of power users, you’ll be able to attach an external display through a mini DisplayPort.

WinSuperSite adds more detail, saying the dock will be compatible with Surface Pro and Surface Pro 2, but not Surface RT or Surface 2. You’ll also get a 1 Gbps Ethernet port if Wi-Fi doesn’t do it for you, as well as a microphone, and headphone/speaker ports.

Word is that the Surface 2 will hit the shelves in mid-October, because that’s also when Microsoft plans to launch Windows 8.1 as used in Panasonic’s huge 4K Toughpad.

Microsoft will more than likely reveal all at its event on September 23rd.