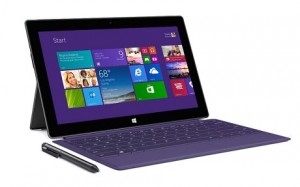 The second generation of Microsoft’s Surface tablet PCs have just been revealed so here’s the specs and UK prices.

Surface 2 and Surface Pro 2 each benefit from improvements to processing power, battery life, display and camera resolution. There’s even a new kickstand that boasts dual angles so that users can balance the Surface on their lap or at their desk. I know!

Enhancements in Windows RT 8.1 and Windows 8.1 Pro also make the Surface 2 and Surface Pro 2 more powerful and customisable, according to Microsoft.

Called simply Surface 2, there are two entry-level models based on an update of the now ill-fated Surface RT. The 32GB model will cost £359 and the 64GB will cost £439.

The Surface 2 is powered by an NVIDIA Tegra 4 processor, which should help make apps run faster and smoother whilst increasing battery life to up to 10 hours for video playback.

The 10.6-inch full HD display now renders 1080p video, and its full-size USB port has been upgraded to USB 3.0 for speedier file transfers.

Camera resolution has increased too, with a 3.5-megapixel front camera and 5-megapixel rear camera, both capable of capturing 1080p video and featuring improved low-light performance. The tablet is also marginally thinner and lighter than its predecessor, at 0.35 inches (9mm) thick and 1.49 lbs (676g).

The Surface 2 will ship with Windows RT 8.1, which brings along improvements to personalisation, search, multitasking, built-in apps, the Windows Store experience and connectivity to cloud-based storage.

The new Xbox Music allows users to stream songs for free, and users can also download an updated Video app and games such as Halo: Spartan Assault from the Windows Store. 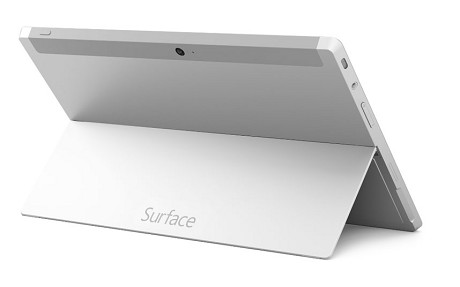 the Surface Pro 2 is the successor to the Surface Pro and is powered by a fourth-generation Intel Core i5 processor which, combined with other improvements, delivers increased performance and up to 60% longer battery life than Surface Pro, according to Microsoft.

As per usual, the prices take quite a jump when you start looking at the Surface 2 Pro models.

These are being pushed as full replacements for your main PCs as they offer full-fat Windows 8.1, four USB ports and the latest Intel Core i5 CPU, as well as a significant battery performance boost.

Customers can pre-order the Surface 2 and Surface Pro 2 now, either online at http://www.MicrosoftStore.com, in Microsoft Stores, or from select retailers including John Lewis.

All models will arrive in the UK on October 22nd.

Here’s a couple of Microsoft’s promo vids for the new Surface tablet for your enjoyment: