Microsoft smart watch in the pipeline 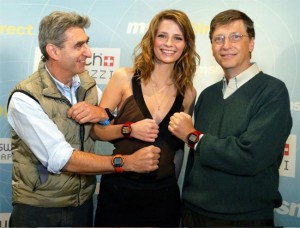 The world of Smart Watches is currently the tech space where there seems to be some ‘anything you can do, I can do better’ going on. Apple are rumored to be working on an iOS smart watch, Samsung’s Altius is said to be their Android version and now, according to a recent report, there is a Microsoft Smart Watch in the works.

The Smart Watch looks to be the latest place where mobile gadgetyness is getting competitive. As well as Apple, Samsung and Sony, Microsoft is rumoured to be working on their own wrist-mounted, touchscreen tech.

According to the recent report Microsoft are currently working on a Smart Watch, although it is unclear as yet on whether the company intends to release the device as an actual product.

One executive said he met with Microsoft’s research and development team at the software company’s Redmond headquarters. But it’s unclear whether Microsoft will opt to move ahead with the watch, they said.

I am guessing that the Microsoft Smart Watch will be running on the Windows Phone 8 platform, and would be able to pair with Windows Phone 8 smartphones as well as Windows 8 tablets, laptops, etc, although there are no actual details about the hardware and software as yet.

Do you think that smart watches are a good idea? Do have one, or are considering buying one?