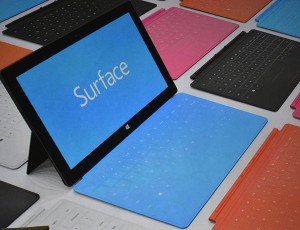 Microsoft’s tablet building partners were no doubt more than a little dismayed at the surprise unveiling of the Surface Windows 8 tablet – but now they’re told that after seeing their designs Microsoft thought they’d better show them how to suck eggs… or something like that.

Microsoft may be rubbing people up the wrong way thanks to their latest bit of hardware.

Microsoft are pretty proud of its Windows 8-powered Surface tablets but one of the heads at Acer has already gone on record saying that he thinks the Surface will fail in its fight with Apple. C’mon, play nice kids!

Now, Microsoft has basically said that it went ahead with the device after seeing its partners’ attempts. Ouch!

“Microsoft looked at what the [PC makers] were doing, seeing if it could meet their Windows 8 needs and then took action based on that,” Patrick Moorhead, president of Moor Insights & Strategy said in an interview. Moorhead has spoken to senior executives at various PC makers – no names mentioned; wisely.

He then sticks the boot in saying: “If Microsoft had seen compelling enough plans from [PC makers], they wouldn’t have needed to do this,” .

I can’t help but think he finished that off with “Nyah-nyah-na-nyah-nyah!” and blowing raspberries.

Microsoft’s launching of a tablet is one thing but it had total access to confidential information about all their devices which kinda gives them an unfair advantage to any other manufacturer in the industry.

They weren’t feeling too sharey-sharey by the sounds of things. There are rumours that the Microsoft Surface was developed by engineers working in windowless rooms. Hmmmm… windowless for Windows?

Windows 8 and the Surface tablets are due to land around October – there has already been a leaked price for the new Microsoft hardware.