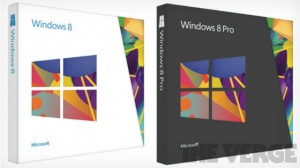 After the RTM version heading out to computer cobblers, and the final version of Windows 8 hitting the torrents, Microsoft has just unveiled the packaging for its latest operating system.

The classy yet colourful boxes are emblazoned with a multi-coloured Windows logo on two different backgrounds. The white is assigned to regular Windows 8, and black proves you own Windows 8 Pro.

Earlier reports suggested that Microsoft would no longer provide the retail boxed copies of Windows 8, aside from some upgrade DVDs, instead relying on USB sticks for the new OS.

Microsoft has already announced that October 26 will see Windows 8 launch for consumers with the RTM (Release To Manufacturers) version being good to go right now.