Microsoft release Surface Pro prices – have they got it right? 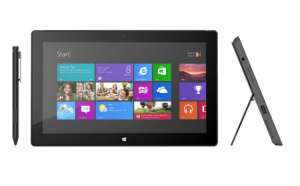 Microsoft has announced the prices for both versions of its Surface Pro tablet, which is set to release sometime in January – is it priced to sell or will it just be added to wish lists?

Both versions come with a stylus and identical internal specifications, apart for storage capacity – and that has been up for debate too!

What does that chunk of cash get you then? Well, not a Touch/Type Cover – that will cost you an extra $120/$130 respectively.

You do get, however, is a higher-resolution screen than the Surface Pro’s lesser sibling, a Core i5 processor, Intel HD Graphics 4000 graphics, 4 gigs of RAM and (most importantly) the full version of Windows 8 Pro.

With all of that power slipped in to the Surface’s slender shell the Pro’s battery life is expected to be around half of that enjoyed by the Surface RT.

So, according to those tech know-it-alls over at Engadget, this should equate to roughly 4.5 hours of use which isn’t bad and should see you through most one-way journeys before the Pro needs topping up with go-juice.

There’s still no word of a UK price for Microsoft’s Surface Pro. However, given the exchange rate and the addition of sales/Brit tax, the $899 64GB model should work out at roughly £675 and the $999 128GB version at around £749 – these are not precise prices.

Don’t forget that you’d still need to add a keyboard at £100 extra. Let’s face it, if you’re buying a Surface Pro over the cheaper RT tablet then you’re probably going to be doing stuff on it that needs a keyboard rather than just a nifty Windows 8 slate.

You could get a cheaper laptop, true but chances are that it’ll either lack the grunt or the portability of the Surface Pro.

Looking around at the current crop of Ultrabooks these seem to be more expensive than a Pro + keyboard – the Samsung Series 9 notebook, released in February costs around £1000 and Sammy’s Series 5 touchscreen Ultrabook costs around £800. The Acer Aspire S5 is skinny but will also demand between £980 and £1200 of your hard-earned.

The thing is that all those will probably give you more battery life, but then, if you’re looking at the Microsoft Surface, you are obviously in the market for a tablet and not a laptop/Ultrabook in the first place.

The Acer Iconia W700P is a Windows 8 tablet that comes with a keyboard dock/stand and has a US price tag of $1049 and so, should, work out a little cheaper than the Microsoft version – but not by much. Like the Surface Pro, I can’t get my hands on UK pricing right now.

Given my guesstimate of the UK pricing and the Surface Pro’s ability for big-boy jobs then I reckon, at least on paper, Microsoft has the pricing about right for what should be a well bolted together and potent tablet.

What do you think? Is it still too much to pay when you know that the next versions are already being worked on?