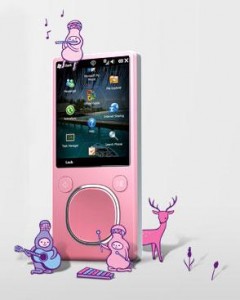 It looks like, as well as a new Zune, Microsoft maybe chucking out aÂ mobile phone.

The Wall Street Journal is reporting that there’s a super-secret project, codenamed ‘Pink’Â , being worked on between the big M and Verizon.

The WSJ reckons the phone will be a touchscreen multimedia phone that willÂ feature Microsoft’s version of the Apple App Store, the Windows Marketplace for Mobile.

The device, although directed by Microsoft, will probably be built byÂ a third party – like the Zune, which is built by Toshiba.

Apparently the Pink project stems from Microsoft’s acquisition of Danger Inc a year ago, the company that designed the software in the T-Mobile Sidekick.

Verizon is eager to get its hands on a phone that will challenge the iPhone, which is exclusive to the AT&T network in the US (for now) – remember the recent rumours suggestingÂ that Verizon/Vodafone may be teaming up with Apple?

MicrosoftÂ is keeping quiet as always -Â but just to confuse everyone: couldÂ Pink be a Google Android-like software environment rather than a device?