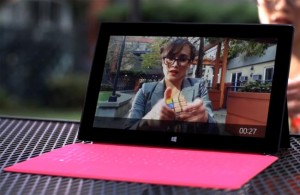 Seven inch tablets are extremely popular at the moment, with the Amazon Kindle Fire, Google Nexus 7, iPad Mini, even the Asus Fonepad. Apparently Microsoft has noticed this.

That’s right, according to a recent report, Microsoft is working on a 7 inch Surface tablet.

The word comes from the usually shadowy “people familiar with the company’s plans” that Microsoft is currently working on their next generation of Surface tablets, and the line up includes a 7-incher.

Microsoft hadn’t originally planned to launch a 7-inch tablet when their Surface tablets were launched last year, but due to the popularity of smaller tablets, Microsoft seems to be changing its strategy.

Needless to say that a smaller, cheaper alternative could help Ballmer & co make its tablet range more attractive to a wider audience. Including me.

It will be interesting to see what a 7-inch Surface tablet from Microsoft is like, and whether the company are able to launch a reasonably priced tablet to compete with the current market leaders.