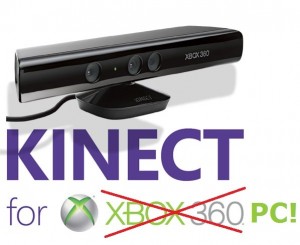 Fancy controlling your puter by waving your arms around?

Well, Microsoft has gone official with the announcement that they are making the controller-free motion gaming peripheral known as Kinect fully compatible with Windows PCs.

Microsoft just unveiled the SDK which will be made available to developers in spring thus allowing the motion gaming system to be used on your lappy or desktop.

The announcement of the Kinect for Windows SDK was made on the official blog which stated: “It will be available this spring as a free download, and will give academic researchers and enthusiasts access to key pieces of the Kinect system – such as the audio technology, system application programming interfaces and direct control of the Kinect sensor itself.”

OK – after seeing the variety of YouTube clips showing the Kinetic being hacked this is hardly a bold move but the Big M is happy nonetheless.

“The possibilities are endless. Natural and intuitive technologies such as Kinect can be more than just a great platform for gaming and entertainment. They open up enormous opportunities across a wide variety of scenarios, including addressing societal issues in areas such as healthcare and education.”

Are you excited by this? Let me know 🙂