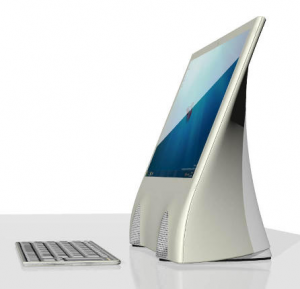 Microsoft is apparently beavering away on Windows 8 if this huge leak is anything to go by.

All kinds of slides and notes have slipped out from Microsoft’s tight security via Dell and landed on Microsoft Kitchen’s pages.

It looks like the shiny new Windows 8 app store will follow the Zune-style interface and it will automatically sense which device you’re using. Â As well as featuring home-grown Microsoft apps it will also peddle software from other firms and device makers.

Microsoft seems to still be gunning for tablets and laptops even though the last thing I recall about the Slate’s operating system was that webOS was the favoured choice. Windows 8 is still looking to be your tablet or touchscreen desk-tops BFF.

They’ve even rendered a neat looking desk-top puter which has a slightly Appley taste if you ask me – but, I’m guessing, this will be a touchscreen number.

Talking about Apple flavours appearing in the Microsoft documents – There’s a rather curious slide entitled â€œHow Apple does it: a virtuous cycleâ€. It looks like Microsoft admires the Apple user experience and even uses the simplistic Jobsism of Â â€œit just worksâ€.

The Windows 8 app store will also be pushing Microsoftâ€™s cloud-based computing nirvana. Office 2010 web apps are very much in evidence and the plan seems to be that your apps and settings to follow you as you swap from device to device.

How do you feel about your puter recognising you? Â Well, it seems machines loaded with Win8 will be able to do just like that in a Kinect kinda way. Â The system will use your puter’s webcam in order to recognise your face. Â I suppose that this will do away with forgetting your passwords when trying to log in but could this also lead to other Kinect-style additions such as gesture control?

What would you want/expect from your OS by then?