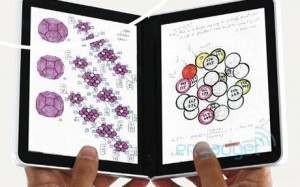 Ok, so the iPad isn’t floating everyone’s boat is it?

I’ve actually been interested in Microsoft’s offering for quite some time now and there’s some more info seeping through about the twin screened tablet known as Courier.

So, we all already know that the Courier will react in a nice way to being stroked and poked by either finger or stylus but the video below also shows that Microsoft’s Courier has shrunk since we first got sneaky peeks at it.

The shrinkage will obviously help it be more portable and, as it looks to be around 5″x7″ and about an inch think, should be luggable +++ 🙂

It beats the Apple table by seemingly sporting a camera. The Courier, as well as having the pinch-zoom touchscreeness can also recognise handwriting when using the stylus which combined with being able to cope with multiple apps running is going to make Mr Jobs weep. I particularly like the cut and paste using the stylus shown in the vid below.

You are able to keep ‘Journals’ which, given its book-like form factor, are kinda like multi-media scrapbooks. This makes me think that the big M may be pushing the Courier as Filofax for the 21st Century. It’s neat that you can make a journal your homepage so if you’re off to a meeting you can have all your relevant notes, pics, etc right at the front of your do everything organiser.

According to the whispers on Engadget the Courier UX will be purring along using the Tegra 2 OS as found on the Zune HD and not Windows 7 – so a little similar to Apple’s choice of using the iPhone OS and not Mac OSX.

As I mentioned before:  We should be looking at the Micorsoft Courier UX as a small Surface device.  The OS indeed resembles the Surface operating system with the added bonus of mobile niceties such as maps and internetweb.

Reckon it’s a no-brainer to think that the Courier would make a great e-Book reader huh?

Microsoft is aiming to launch this in the second half of this year and it sounds like it will be keenly priced as they’re planning large volume sales.