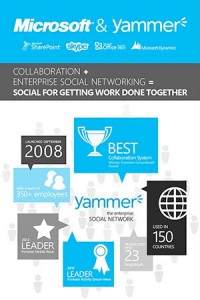 Social network, Yammer, is now officially part of the Redmond family and has been adopted by the company’s Office division.

Yammer, the ‘Private Social Network for your Company’ will be added to the Microsoft Office division of Microsoft with the team already working on the adoption of Yammer’s standalone service within Microsoft. Just in time for Windows 8 and the upcoming new Office suite.

The official statement on the Microsoft blog reads: “We couldn’t be more pleased to welcome the Yammer team to the Microsoft Office Division. We’re excited about the road ahead. We look forward to accelerating the adoption of Yammer’s standalone service, and enhancing the social capabilities in Microsoft’s communication and collaboration offerings”.

The sentiment is reciprocated by Yammer: “We’re pleased to announce that Yammer is now part of Microsoft’s Office Division. We are thrilled to start this new chapter and join forces with Microsoft to massively accelerate our vision to change the way work gets done with software that is built for the enterprise and loved by users”.