Microsoft Chip In $24 Million To Get Touchscreens on Our Computers 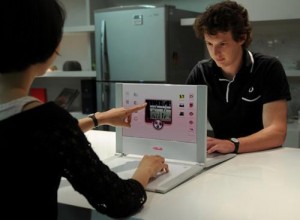 Weâ€™re going to be seeing a lot more touchscreen computers.

That’s what Microsoft is hoping as the big M’s latest OS, Windows 7, big selling points is that it supports a multitouch user-interface – just like those found on the iPhone and Tablet PC’s.

To further lubricate the adoption of such touchscreen tech, Microsoft led a $24 million chip-in to Israeli startup N-trig.

With the help of other investors the total soon racked up to $52 million in the space of a couple of years.

So, are we going to be forced to use a Touchscreen puter in the near future?

But let me level with you.

For Tablet PCs a touchscreen is pretty much a given you have to agree.

But for desktops and laptops purely using a touchscreen is going to be awkward and potentially painful having your arm hang in mid-air instead of resting on a surface.

I can see a secondary screen taking the place of the trackpad as a lot of manufacturers are already doing or even instead of a hard keyboard.

I’m still unconvinced by simply putting touchscreens on conventional computers without altering their design – with or without Windows 7.