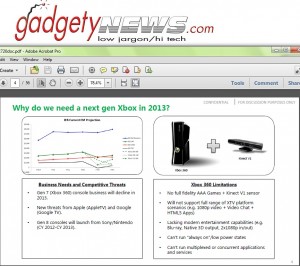 Remember that 56-page document which road-mapped Microsoft’s “Xbox 720” plans? I was suspicious of its veracity but Microsoft may well have just confirmed that they’re real.

The leaked document appeared to reveal potential ideas around Kinect Glasses and more. The document was hosted on Scribd but then swiftly removed at the request of Covington & Burling LLP, an international law firm that lists Microsoft as one of its clients.

So, that kinda made the document look like it was, at the very least, close to the truth.

Now though, Microsoft’s team of internet investigators has started to send takedown notices to other sites hosting the leaked document.

Ihned.cz, a technology site based in Czech Republic, received a notice over the weekend from Alan Radford, Internet Investigator on behalf of Microsoft:

Microsoft has received information that the domain listed above, which appears to be on servers under your control, is offering unlicensed copies of, or is engaged in other unauthorized activities relating to copyrighted works published by Microsoft.

2. Copyright infringing material or activity found at the following location(s):

Microsoft is pretty keen on this behaviour and, according to a recent Google copyright report, Microsoft has issued 448,236 URL removal requests – in the past month!

The mention of an “IEB Roadmap,” Microsoft’s Xbox division, appears to confirm the leaked document’s legitimacy.

Microsoft has also sent a takedown notice to Dropbox, resulting in a public sharing block of the document in question on the cloud storage service.