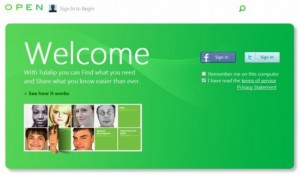 Oooopsy! Microsoft has let everyone see their plans for a new social network called Tulalip.

The leaked splash page has hit the interwebs after the eagle-eyes of Fusible spotted that Microsoft had acquired the domain name socl.com.

They dutifully went over to the newly bought URL and the landing page for Tulalip, as seen here, greeted them.

Tulalip blatantly appears to be some kind of social search and networking tool featuring the now familiar tile layout which could possibly tie-in with Microsoft’s discovery tool: Bing.

As to be expected, the links aren’t linked to anything as yet and now the page has since been  torn down.

There is, however, a nice and friendly message in its place which reads: “Thanks for stopping by. Socl.com is an internal design project from a team in Microsoft Research which was mistakenly published to the Web. We didn’t mean to, honest.“

A lovely sentiment but as for this purely being an ‘internal project’ – no one will be surprised when it is finally revealed that Microsoft is planning to launch a social site of some descript.

As well as being Binged, chances are that Tulalip could get hooked up with Big M’s Xbox Live service which, for all intents and purposes, is already pretty much a social network in itself.

As for the name – it might seem odd to some (c’mon – Wii for crying out loud!) but it apparently the name of a group of First Nation American tribes who live around Microsoft HQ in Redmond and pronounced ‘tuh-lay-lup’.