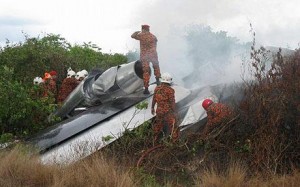 Sad news as the inventor of the Jet Pod Flying Taxi I reported about back in May last year has died in a test flight.

The aviation entrepreneur, aged 53, died when the prototype aircraft crashed and burst into flames shortly after take-off from a landing strip in the northern town of Taiping according to Malaysian police.

Mr Dacre was an inventor and the managing director of British-based Avcen Ltd.  The company planned to have the “Jetpod” eight-seater flying taxi in production by 2010 – I was hoping that it could be the official Olympic transport.

Local newspapers quoted witnesses as saying that the aircraft attempted to take off several times before soaring into the sky and then abruptly veering to the left and crashing to the ground.

The Jetpod was designed to have a cruising speed of 350 miles (550 kilometres) per hour, be quieter and quicker than a helicopter, and require just 125 meters to take off and 300 meters to land.