Ok – noone can say that he wasn’t a skilled arranger, composer, writer and dancer.

Although the King of Pop has gone to jam with James Brown and Elvis I can’t ignore the fact that he also touched the gadget world.

This is the secret behind how Michael Jackson and his dancers could lean at 45-degree angles during live performances of the song “Smooth Criminal“. 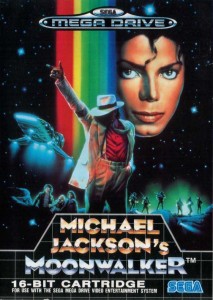 Moonwalker was an early example of celebs appearing in video games, and for using digitised versions of some of Jacko’s songs.

The ‘plot’ is that MJ is tasked with rescuing helpless children from a crime boss named Mr. Big.

The arcade version was a basic isometric beat-’em-up, with two players able to play as twin Jackos – one in a white suit, the other in a red one.

Jackson’s special attack was to obviously bust a wikkid dance move – when he starts his move a spotlight appears as he pulled off some signature spins and kicks, destroying anyone in his soft-shoes’ way.