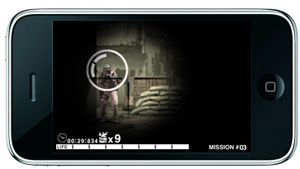 If you’re an XBox 360 owner, however, you may be confused when you see that the next MGS fix is coming out on the iPhone (I’m guessing that the iPod Touch will also be able to rock this as well).

It has been pencilled for releaseÂ in Spring, 2009.

It will start with eight stagesÂ and KonamiÂ promises that more will be made available later on (for download I assume).

There’ll also be freebies in the form of images and wallpapersÂ which are gainedÂ by earning points from playing the game.

You’ve probably already worked out that the game will be controlled by touchscreen, which Konami claims will make it

â€œsimple for anyone to move their alignment or switch to zoom mode.â€

Konami also announced a number of other iPhoneÂ releases including Dance Dance Revolution S Lite, Silent Hill: The Escape and Frogger, which are all due for release shortly.

What strikes me is that with such big names designing for the iPhone is the time up for the likes of the DS and PSP?Â