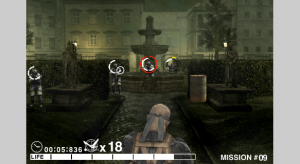 That was the last time I brought you any news about Metal Gear Solid Touch.

This is to be Konamiâ€™s first game for the iPhone/iPod touch.

You play the character of Old Snake and bound around international hot spots such as Eastern Europe, the Middle East, South America and Shadow Moses.

Konami says to expect to bump into â€œwell-known antagonists from past Metal Gear Solid titles,â€ in this, the â€œfinal chapter in the legendary saga of Solid Snake.â€

There should be a demo of the game, or as Konami calls it, an â€œAdvance Editionâ€ within a month.

Apparently it will have the first 12 levels!!Â  🙂

For those 12 levels I’m guessing some cash will have to change hands as Konami is offering a free upgrade to the full game for owners of the â€œAdvance Editionâ€.

Check out the gallery: