A couple of weeks ago I was invited along to meet the high-end Meridian hi-fi range – in particular the new Director DAC.

Meridian Audio, for me, has always been an aspirational brand. The Cambridgeshire-based company are renowned amongst audiophiles as hi-fi royalty, being the first British manufacturer of CD players way back in 1983.

I do love my Hi-Fi stuff but my landlord would rather me pay my rent. Gah!

The thing is, I was pleasantly surprised to see that Meridian has not only recognised the need to combat the heavily compressed audio files that most of us have libraries of on our phones and laptops, but also to do it in a way that’s not eye-wateringly expensive for the likes of mere mortals to purchase.

The Meridian Director is the latest DAC (Digital Analogue Converter) following on from the fab Explorer (more on that later).

The Director is aimed to live at home or the office, to be used through your networked hi-fi or fixed computer audio system.

The Meridian Audio Director is housed in an appealing smooth metal tube-like chassis with shiny plastic end caps. The front end cap features five lights that indicate both the input and the rough sample rate.

The large center button on the front enables the user to select USB or S/PDIF as the input.

The rear of the Director features a full size USB B input, full size RCA analog outputs, and a dual coax/TOSLink input.

The Director’s USB port also doubles as its power port. This USB port can receive power from either a computer’s USB port or the bundled USB power adapter.

The Director features what the company calls its Proprietary Resolution Enhancement technologies, mainly an Apodising filter and upsampling algorithms. The USB and coaxial S/PDIF inputs both handle 24 bit audio at sample rates up through 192 kHz.

According to Meridian, “Standard (44.1/48kHz) digital signals are upsampled to 88.2/96kHz sampling and Meridian’s unique Apodising upsampling filter can actually fix faults in the original recording.”

Several of the Director’s internal components are of the same ilk as Meridian’s flagship 800 Series products. For example the two oscillators, dedicated linear regulator, capacitors, and resistors in the DAC output filter, and the 2v RMS gold plated RCA connectors are all the same or similar to the 800 Series components.

In my short time with the Director, I was impressed. Not only by what my ears were telling me, but with the price – £449.

Yup, the Director was good – but I was really blown away by its smaller and even less expensive sibling – the Explorer. 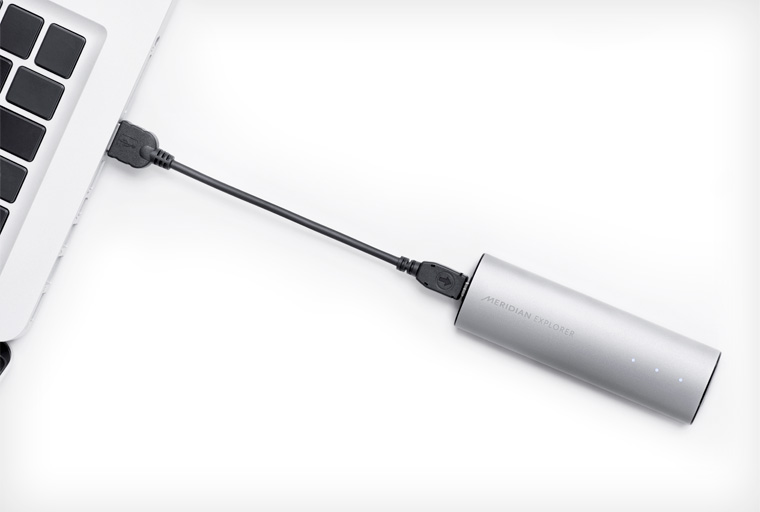 British hi-fi company Meridian Audio has really hit the sweet-spot of quality and price, as far as I’m concerned, with its £249 Explorer USB DAC.

Let me just put that price in to context before I go any further. £250 for a clever little silver add-on might not seem value for money at first sight but, when I see so many people willing to buy a pair of fashionable, bass-heavy headphones for £270, the Explorer can only be money well spent.

The Explorer looks elegant, and the slim aluminium casing feels nicely finished and, as one of my friends at the event pointed out, matches nicely with the MacBook it was plugged in to.

As with the Director, the connections are housed at either end of the cylinder, and are fitted with black plastic end caps.

On one side there’s the mini USB input. The DAC is an asynchronous USB design, which means that the Explorer, rather than the internal clock DAC of your computer, is in charge of controlling the timing of the data transfer.

This is far preferable, as the timing circuits inside the Explorer are of a much higher quality than those used in computers – which means there are fewer digital timing errors (jitter), leading to a better sound.

There are two USB master clocks inside to reduce jitter levels, one for 44.1, 88.2 and 176.4kHz sampling frequencies, and the other for 48, 96 and 192kHz. More accurate timing means greater clarity, precision and overall better sound performance.

Furthermore, the Explorer employs USB audio class 2.0, which allows full native playback of high-resolution 192kHz sample rates. This is opposed to audio class 1.0 which limits the sample rate to 96kHz, with higher sample rates having to be downsampled.

At the other end of the Explorer is the 3.5mm headphone output which is what this DAC was built for – portable, high quality audio. This second output doubles up as both an analogue and a digital optical output.

The analogue option allows you to take a line level out to a stereo amplifier, while you can use the digital optical output (limited to 96kHz) for additional signal processing or for recording with minimal jitter.

All you have to do to use the Meridian Explorer is plug and play on a Mac. Some Windows users will have to install a driver to use the DAC. No biggy, though.

I love the clean design of the Explorer with only the Meridian logo and three light indicators marking its fascia.

The important stuff is how the Explorer performs and compared with using the headphone output on a MacBook Pro the Explorer provides a remarkable boost to the sound quality.

As a test I was subjected to a Michael Buble track. Through the headphones it was standard fare. The finger snaps in the track’s intro sounded like they were recorded in a separate take, the bass could be heard but lacked warmth and definition.

Sling in the Explorer and suddenly that all changed. The track is now alive, full of rich textures. The bass is rounder, fatter and expressive, those finger clicks now appear front and centre. All of the band now sound like they’re in the same room, at the same time all enjoying an open and well-placed soundfield. This is the only time I have ever asked someone to let me listen to some more Buble!

The Explorer produces a clear and clean sound with a well-judged balance: basslines are substantial and tautly controlled, while the higher frequencies have enough space to soar without any hint of that usual digital brittle brightness.

Switch to higher-quality recordings, such as a 24bit/192kHz and the detail and clarity increases.

What hit me was the fact that I could tell I would not suffer the same aural fatigue that I currently get when listening to MP3s or similar for any length of time thanks to analogue warmth replacing the harsh, cold, sterility that you get sometimes from digital recordings.

As I stated to one of the folks there representing Meridian “it’s the difference to being at a show, sat in the gods and being in the middle of row 1”.

It seems that the Meridian Explorer is proving to be very popular as I have asked for a review device so that I can test it in the field but the company is concentrating on fulfilling all the orders its receiving.

That can only be a good thing. As soon as I am able to give the Explorer a full Gadgety review – I’ll let you know 🙂