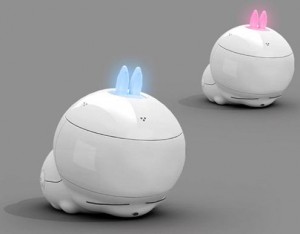 Mashimaro – a cross between a marshmallow and a rabbit.

This little critter is set to touch the hearts of all those into cute gadgety things.

This MP3 Rabbit floats, asleep, over the meadows she blackens. Fields of psychic energy erupt like solar flares from her bloated head, which is available in pearl white, sky blue and soft pink. Meat creatures that wander too close simply pop: Mashimaro’s hum is her world’s vibration, the essence of its fear.

The rabbit has 2 gigs of storage, has light-up ears that also serve as a five way controller.

Thereâ€™s a dubiously placed jack for headphones (saying no more about that) as well a USB connector in there somewhere that charges an internal battery for up to 9 hours of playback.

If you’re in the market for a marshmallow inspired rabbit MP3 player the Mashimaro MP3 player costs about $45.

You get a choice of non-bunny colours of sky blue or soft pink, but it also comes in white.

Have a look at the translated Product Page