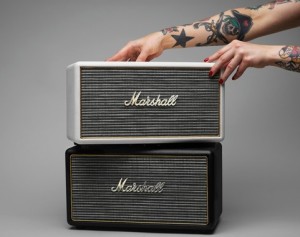 There’s something comforting about seeing the name Marshall emblazoned on the front of a guitarist’s amp and/or speakers (I’ve never got along with their bass gear, sorry) and I am sure that there’s a few people out there that, even though they’re not players, would love to crank up a rig with Jim’s name on and rock out. Now’s your chance.

Bristish amp legend, Marshall, has just released a speaker which will let you blast out all of your favorite tracks on something that looks just as good as those rigs up on stage.

Marshall’s new Stanmore wireless speaker has a distinctly retro design that calls back to the company’s classic amps, with a textured black body, a fretted front grill, and even analogue knobs on top to control it all.

Just because it has those classic valve looks (although these don’t go up to eleven), getting music to play over it is done in a thoroughly modern way.

The Stanmore supports input from Bluetooth, headphone and RCA connectors, and optical audio as well. It even includes a coiled, double-sided headphone cable that looks just like a shrunken down version of what would traditionally be jacked into a guitar.

The speaker is available right now for £400, and it even comes in a sweet creamy white.

This isn’t Marshall’s first foray back into its design trove, however. Marshall previously released the Hanwell speaker, a similarly designed set that came in at a much larger size and with twice the price, not to mention their more personal set of cans.

Personally, I love their beer fridge.