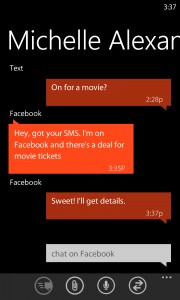 I’ve just hot-footed it back from the Microsoft Windows Phone press event which was held at Millbank Tower with news that Windows Phone 7.5, Codenamed ‘Mango’, has just been unveiled – only to see that all the details are already online andÂ after receiving the press release into my inbox whilst I was still stood chatting to Group Product Manager, JP Wollersheim.

So – what’s the deal with Mango then?

For a start, the bragging kicked off with Microsoft saying that its Mango flavoured refresh to the Windows Phone 7 mobile operating system brings no fewer than 500 new features to M-powered handsets!

Everyone loves a multitasker and WinPho7 is no different. The Mango multitasking is not unlike the iPhone 4’s – hold down the ‘back’ button and various frames of what you left open are viewable and flick-past-able. It’s all very nice and easy and, I’m told, the only limit to how many windows are open is the cached memory. This is all at no detriment to battery life apparently.

The Tiles which are the face of WinPho7 have been enlivened and new Mango partners, British Airways, have done a sterling job with their new app. On the Mango’d version of the app the live tile can show you that it’s time to check in, the gate number or that a hideous ash cloud has delayed your flight long enough to do another supermarket sweep of the duty-free.

The usual way of accessing apps was likened to wanting “to go to the kitchen and having to always go to the front door first” but with these tiles you can access updates without having to navigate to the specific application.

Bing has been on Windows Phone 7 handsets since day one, it even has its own hardware button, but now the search tool as been given a boost with Quick Cards. Think of Bing Quick Cards as helpfully filed slices of information on things such as movies, events or places. You get handed a quick summary of relevant information, including related apps, so you donâ€™t have to go to the website to get the contact information or opening times.

Bing has also added Local Scout – a “hyper-local” search which lists things to do, places to eat and drink and shops in theÂ vicinityÂ so you can stop looking like a tourist – although you might look like someone with a phone checking compulsion!

Groups are a very handy way of juggling your various social groups. Bundle your band, darts team, rambling group, family, work mates, or whatever into handy piles of people. Then, under a chosen individual icon, you’re able to message that chosen group of folk at the same time – if you’re about to send an instant message and someone is offline then you get the option to email them instead when the message goes out. You also get to see the photo albums (taken from Facebook, etc), updates and conversations of each individual included.

Conversation threads show your communications across any platform used (main pic): moving from IM to Facebook and SMS all kept in chronological order.

â€œSeven months ago we started our mission to make smartphones smarter and easier for people to do more,â€ said Andy Lees, President of the Mobile Communications Business at Microsoft. â€œWith Mango, Windows Phone takes a major step forward in redefining how people communicate and use apps and the Internet, giving you better results with less effort”.

As expected, Twitter and LinkedIn have now joined Skype, Facebook and IM for your social pleasure. I particularly liked the Facebook event integration to the calendar so possible clashes or forgetfulness should be less common.

Having the power of the internet in your hand seemed a big deal for Achim Berg, Corporate Vice President, Windows Phone Marketing:

â€œIt will not be similar to that on the PC, it will be exactly the same.â€

That hefty boast comes along with a full version of Microsoft Internet Explorer 9 being baked into Mango.

Talking about speedy – in a head-to-head HTML5 drag race between iPhone 4 and Mango enabled WinPho7 handset the Microsoft handset (funnily enough) wiped the floor with the Apple.

WinPho7 now has 18,000 apps in its Market from a standing-start seven months ago and, according to Berg, they are about to overtake RIM and have Android and iOS in their sights.

Hedderman also showed us one of his favourite developments – text to speech and speech to text. As a keen cyclist when he’s listening to music on his phone when out on a ride and gets an SMS message it could be tricky getting his phone out without stopping. With text to speech the SMS can be automatically read out by the phone and then, should you wish to reply, you can dictate your message and send it – without having to reach into your pocket, or even touch the phone. Similarly you can skip tracks by shouting at the mic.

There is still no specific release date for the update codenamed Mango but Microsoft has said that it will appear in Autumn this year. Interestingly the tech giant revealed the launch of the OS update would also see the arrival of the first Nokia Windows Phone 7 devices.

â€œNokia handset will be coming to market with Mango,â€ said Berg.

Acer, Fujitsu and ZTE will also make Windows Phone handsets, Microsoft said today. But still no new phones to show off as yet.

Would you ditch your Android or iOS handset in favour of a Mango device?