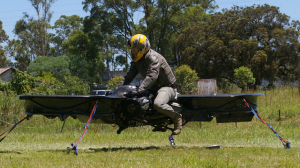 Fancy getting some Speeder-Bike action? Who doesn’t?

Aussie, Chris Malloy is actually in the process of making a real, honest to goodness hoverbike!

Malloy’s design looks kinda like half a Parrot AR Drone but once this futuristic form of transportation has been completed Chris reckons that it’ll be able to fly up to 10,000 feet and as fast as 173mph! New pants please!

Spinning the blades is an 1170cc engine which pushes out 80kW to the two propellers.

Naturally the body is constructed from high tech Kevlar reinforced carbon fiber and the propellers are built from Tasmanian Oak with carbon fiber edges. Nice.

Apparently the flying mechanism is the same as a Chinook helicopter: counter-rotating rotors cancel out each rotor’s torque reaction. I guess if it wasn’t like this then the result would be having the bike/Chinook spinning around very fast.

Like the Speeder-Bike the Hoverbike will be steered just like a regular motorbike – you get a set of handle bars with the throttle control on the right grip. The main difference is that the left grip controls up or down.

“Malloy also says he plans to have the whole system controlled by gyros and he has already designed and partially tested the circuits and code required. But he initially wants to fine-tune the controls mechanically first to ensure he produces the most stable design. Eventually however, he says there will be room for a computer override of sorts to stop amateur pilots tipping over.”

This is an extremely cool thing! Malloy will be making more tests over the next few months and posting vids as he does.

Chris is looking for investors which would enable him to get the Hoverbike into limited production within a year and full production in the next 2 years.

$40,000 for a Hoverbike? I’m opening a special savings account now!