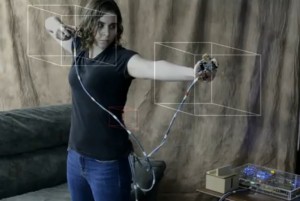 The next generation of game controllers could well be multi-functional. They could not only track your movements but split apart to give certain areas of gaming more realism. A new company named Mad Genius Controllers has surfaced with a working prototype that shows such a contraption working brilliantly.

The Mad Genius setup uses a splittable controller and a processing unit to enable seamless motion control and spacial tracking on any title and system. Because Mad Genius doesn’t use any accelerometers or cameras like the current consoles, its creator notes that accuracy of up to 1/100th of an inch is possible and that this system doesn’t require any modification to the original game.

The video demo below shows the Mad Genius controller being used with an Xbox 360 version of Skyrim through a modified Xbox gamepad.

I have to admit to loving the controller being split and held like bow and arrow, highlighting that both sides are tracked in relation to each other – you’ll probably also notice that the in-game character’s weapon automatically changes without any menu-digging by the user.

The current version is merely a wired proof-of-concept, but Mad Genius plans to eventually make it wireless and then head to Kickstarter for funding.

How awesome would this controller be used in connection with the Oculus Rift and Illumiroom?