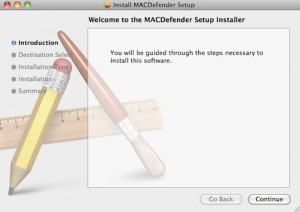 Windows users such as myself have grown accustomed to the many false promises given by shady software and, I hope, have become less trusting and more vigilant. However, you owners of Apple Mac’s may have gotten a little too smug and let your guard down.

It looks like there’s a Mac-based security scare happening after hundreds of Mac fans contacted Apple forums to try to find out how rid their machines of a fake Mac-specific security program.

MACDefender (not to be confused with MacDefender – they seem to be getting a lot of mail recently) is the sneaky software in question and it started doing the rounds earlier this month. MACDefender is advertised as a free Mac security system but once it’s on your Apple puter the scareware pretends to scan your Mac and then goes on to create a list of nonexistent issues that you have to pay to be fixed.

Speaking with the BBC, Graham Cluley, Senior Technology Consultant at Sophos points out that the vast majority of scareware the security firm deals with is indeed targeted at Windows machines.

He did go on to highlight that: “Although there is much less malware in existence for Mac OS X than there is for Windows, that’s no reason to put your head in the sand and think that there are no Mac threats out there.â€

Have you been hit by this or any other scareware on your Apple Mac? Let me know how you fixed the problem.