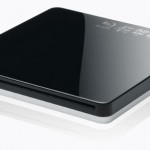 Mr Jobs refuses to make one so Amex Digital has stepped in to give new MacBook / MacBook Pro owners the ability to watch and burn Blu-ray Discs.

You get a choice of black or white for this external drive but it is pretty much the Blu flavour of the portable Super Multi Drive that Amex Digital released back in July.

It’ll burn BD-RE / -R (single-layer) discs at 2x, while dual-layer versions will only toast at 1x; as for blank DVDs, they’ll get done at a rate of 4x to 8x.