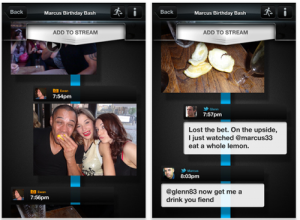 An app from a company that flogs you deodorant seems a bit of a bonkers move – and my first thought was that this was going to be a pretty pointless ‘fun’ app.

I must say that the Stream Mobile from Lynx (yup, those with the AR sexy angels) seems well thought and, dare I say it… useful!

The Android and iOS Lynx Stream app works by pulling together Tweets, Facebook updates and check-ins, photos and videos from you and your buddies in a live stream which is then turned into a highlights video combining every moment of your night out.

After all that has been compiled, you can then choose to share the video through the likes of Facebook and Twitter (if you dare) so all the members last night’s club assault can re-live the action.

To get started simply invite your gang of party animals into the stream – make sure you get everyone as, in true nightclub style, if they’re not on the list; they’re not joining in. If you want to include Johnny Come Lately then you’ll have to start from scratch.

The Lynx Stream homescreen hands you a menu with options to Check-in, Tweet, post your Facebook status, record videos, take a photo and add captions to a scrollable timeline of events.

I actually do think that Lynx Stream Mobile is a winner – especially as it’s free.

Holidays as well as nights out on the tiles can be pieced together as your own reality show.