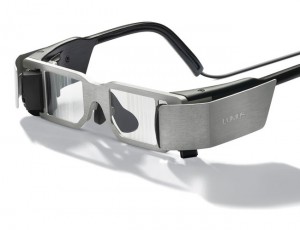 Heads-up displays and augmented reality will be something that we’ll all know about very soon and Lumus has been showcasing their new Lumus DK-32 transparent display glasses at CES.

In the near future you will no longer have to take your phone out of your pocket to get augmented reality (AR) overlays on your map app in order to find that bar. You’d simply have your octo-core handset linked to some clever glasses such as the Lumus DK-32.

The Lumus DK-32 display glasses use an optical engine to project the light on to the lens which is then reflected on to the eye of the wearer through reflectors which are embedded in the lens.

The Lumus DK-32 squirts the image onto a 720p HD display that weighs just 27 grams which is equivalent to having an 87-inch screen right in front of you.