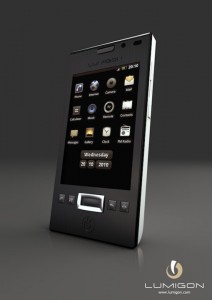 Now, if you recall, Danish phone builder, Lumigon, has been teasing phone freaks around the globe with their mysterious T1.

Originally I mentioned that it will be running on Android 2.1 – well, just to make me look silly they’ve gone and released an official picture with it running the Android 2.2 operating system.

An egg and my face are indeed in alignment.

It will be most likely powered by a Freescale 1GHz 3D processor, sport a 3.2-inch capacitive touchscreen and manage somewhere in the region of 32GB of memory which can be added to thanks to a microSD card slot.

Expect the T1 to include a 5MP camera round back complete with autofocus and flash, as well as having the tick boxes covered with Wi-Fi, Bluetooth, compass and accelerometer.

The important matter of pre-orders and release dates remain the same.

September 20th for the pre-orders with aÂ release party being thrown on October 20th.

Is this sounding enough to get Nokia, Apple, Sony Ericsson and HTC worried?