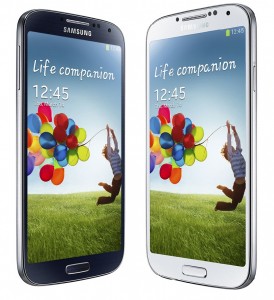 You can pre-order the Samsung Galaxy S4 today ahead of its official UK release on April 26th.

As usual, there’s plenty of options if you want to get it on a contract, but you could always nab it off-contract for £630 SIM free

on Amazon, for the 16GB version.

If that has made your bank account cower in the corner, then here’s a quick once-over the current contract deals available so you can spread the cost.

Three
Three is offering a free Galaxy S4 on a two year contract for £35/month with all you can eat data, 500 minutes and 5,000 texts. An extra £2 a month will get you 2,000 minutes extra thrown in for good measure.
Have a look at all of Three’s S4 plans

Phones 4u
You can get the Galaxy S4 for free on a two year £41/month contract on Orange which will give you 3GB of data a month to play with in addition to unlimited minutes and texts. That’s slightly better than the Vodafone deal in the chart below.
Check out all of Phones 4u’s plans

EE
The ‘cheapest’ deal EE has to offer is an S4 for £270 on a £31/month two year contract with only 500MB of 4G data. Bump that up two 1GB of data and you’re looking at £41/month for two years. Texts and calls are unlimited on all options.
Fancy an S4 on EE? Here are all the plans

Balancing it all out, it looks like Three is the cheapest.

The table above shows a comparison of the best plans from the various networks (looking at plans with 2GB of data or more).

Best value is quite clearly Three thanks to the offer of a free Galaxy S4 on a £35 p/m 2 year deal. At the other end of the spectrum, EE’s 4G contract is substantially more expensive than the rest of the competition.

If you don’t want get tied down to a long contract, or know that you’ll be upgrading after a year, it’s worth looking at buying the handset outright.

As well as Amazon

there’s outlets such as Clove that will furnish you with an unlocked phone from £579.

Once you’ve got your new smartphone then you get a SIM-only contract from any of the networks.

Cheapest still appears to be Three, but GiffGaff is well worth checking out – plenty of my friends are using them after looking for cheaper tariffs for their iPhone 4/4S.

There’s also a very handy tool no Money Saving Supermarket which will help you get comparisons of what’s on offer – lookey here.