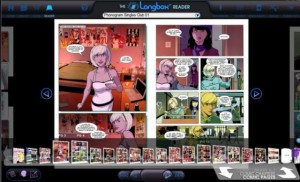 LongBox is hoping to bring the kind of digital distribution common with music and video to the comic world!

The software has been in production for over three years by QuickSilver Software and it will be a free, cross-platform iTunes-style jukebox for comic books – it even appears to feature the similar menu to Cover Flow.

This is a totally different idea to what Marvel has planned.

LongBox CEO and founder Rantz Hoseley is happy to make. “One of our guiding principles is not replacing print or subsuming print, but creating a business model that works hand-in-hand with print. We want a diverse clientele.”

The program contains a viewer that allows you to see pages one at a time or as a double-page spread, zoom in on individual panels, flip through pages, and skin the interface. It even contains an ‘anti-spoiler’ feature so you won’t see what’s coming in a story unless you want to. Since the LBX files are made directly from the InDesign and Quark production files that the publishers send to their printers, the zoom feature won’t result in pixellation which is very cool! 🙂

Readers will be able to bookmark pages, and LongBox will support right-to-left reading for manga as well as Western-style left-to-right.

Not only will LongBox allow users to read and manage their comics from their desktops and mobiles, it will also come with access to an online store so readers can purchase their books directly.

Starting at 99 cents (60p) per issue, the LongBox store will have one major factor that differentiates it from the iTunes model, Hoseley says. “Along with buying an incentivised 12-issue subscription for $10 (Â£6), publishers can and will provide discount coupons for print versions if [the reader] subscribes to the LongBox version.”

In another similarity with iTunes, LongBox will support three methods for getting free comics out to readers. There will be a monthly sampler pack of eight comics, as well as promotional titles that a publisher pays for out-of-pocket.

The platform is designed to support advertisements as well, and Hoseley said it’s possible that certain titles will be made free to readers in exchange for watching an ad – which aint a bad trade off methinks.

LongBox will launch in the Autumn for both Windows and Mac with plans to support handheld devices, smart phones and games consoles by the summer of 2010.

Users will be able to access their LongBox content on up to three systems. “You can have your core library, section it off or burn it to externals,” Hoseley sayd. “We will be keeping track of a user’s entire library.” Hoseley assured me that there would be privacy safeguards, but didn’t specify how or what they would be.

UK availability hasn’t been confirmed – here’s to hoping though!