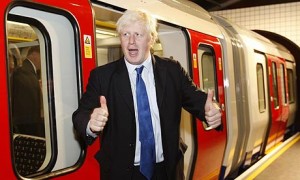 Boris – what on earth goes on under that mop of hair?

The latest ‘idea’ that London’s beloved mayor has had is that he’d love for tube-travellers to continue with their blogging, Facebook updates and Tweeting even when underground.

He announced these plans at the State of London debate. He wants to see WiFi hotspots installed on underground station platforms now as well as shoving them in street lights and bus stops – this is to get the capital all hooked-up before the 2012 Olympics.

“The truth is, I’m on the side of progress if we can possibly do it.” he said. “I think people want the facility of looking at their BlackBerries [on the Tube]”.

Thankfully BJ realises that not only will this plan present a number of technical challenges but it will no doubt cost (us) quite a bit too.

Chances are that The Cloud will be used and therefore some of the costs will be offset by a subscription charge.

I wouldn’t get too excited though. Remember that Johnson’s predecessor, Ken Livingston, said that by 2008 we’d be able to get a mobile phone signal underground – and then the whole thing got canned in 2009?