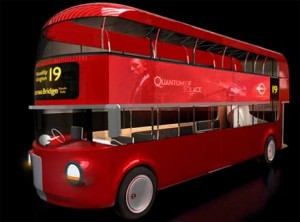 Ah, the Routemaster bus – its a London icon as much as Big Ben, The Tower of London and expensive beer prices.

So, when Mayor Boris announced a competition to design a 21st century version of the much loved Routemaster bus, ears pricked up at Aston Martin HQ.

They buddied up with Sir Norman Foster‘s Gherkin-creating architecture practice Foster + Partners and have come up with the design before you now.

They devised that electric motors in the wheel hubs would drive this new Routemaster, reducing the height of the floors and making it easy for disabled people to get onto the bus. The bus is also far more nimble than its diesel powered forebear with a 10% better turning radius – handy with the amount of roadworks around this city!

The engine can easily be swapped out for maintenance and upgrades while the windows are far larger and include skylights to fill the bus with natural light. The sunlight will also charge the bus’s batteries – for those 5 weeks a year that it’s actually sunny!

There’s also the kind of luxury touches you expect from an Aston Martin design. Filthy fabric seats have been switched out for reconstituted leather and the floors featured recycled wood paneling.

OK – the pics are very clever renders, but the AM/F+P Routemaster will become a reality in 2011 when prototypes will take to the streets of London – I hope that it appears on my commute route!