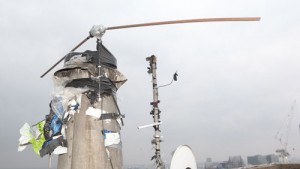 Pirate radio has always had to move forward in order to stay one step ahead. These days the tech and gadgety know-how of untraceable infrared links and backpacks full of transmitters are just some of the ways that the hundreds of pirate radio stations broadcast in London every day.

The video below traces the history of pirate radio in the U.K. from its beginnings, when rock and roll was broadcasted from sea forts and rusting anti-aircraft towers in the mouth of the Thames abandoned after WWII right up to the present cutting edge sounds and home-brewed tech.

Todayâ€™s broadcasts are hidden in plain sight, transmitting from secret tower block studios via homemade rooftop antennas. These maverick DJs are intent in sharing music that has been marginalised by mainstream radio just as the pirates over the last 50 years have always done. From Rock ‘n’ Roll, to Acid House, to Jungle and Grime these stations have been at the forefront of introducing people to new music and offered people in these scenes somewhere to dial in and for the music makers to get their tunes heard.

Whilst the homemade antennas are hidden in plain sight on the tops of those tower blocks and abandoned buildings the makeshift studios they link up to are hidden behind soundproof walls and security gates.

As one modern pirate says, “you’re just putting up an aerial and playing some music, at the end of the day.”

Unfortunately the need for Pirate Stations is dwindling thanks to internet radio – but I still love the fact that these people are so passionate about their music that they’ll go to extraordinary lengths to give cutting edge music a voice.

Watch the video below and try not to have total admiration for these gadgety outlaws: