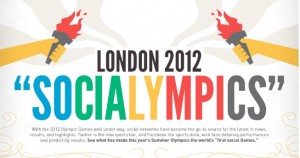 Not only has the London 2012 Olympics received lots of positive reviews from the media – it has proved successful across the interwebs.

Since the Beijing Summer Olympics of 2008, the number of global internet users has increased from 1.5 billion to 2.3 billion – this means that the online buzz of the games has also risen.

The teams obviously know how important it is for morale, motivation and the fans (not to mention the sponsors) that competing athletes interact with their online followers. This saw the athletes encouraged to hit Twitter during time in-between their events.

If you were in any doubt how far reaching the effects of social media are then a quick look at the London Eye during the games then you would’ve seen its physical implementation. The oversized Ferris wheel on the capital’s south bank changed its colour in response to trending tweets, creating a gigantic mood ring for the games.

Social media, therefore, created an Olympic event that was not only entertaining for fans, but one that was truly interactive – the Paralympics will no doubt continue the socially networked global sporting fandom.

London 2012 Socialympics Infographic – An infographic by the team at SEO.com