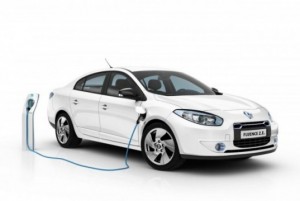 London is pushing forward with its eco plans and now here is a glimpse at the capital’s first all-electric minicab, a Renault Fluence Z.E.

The electric Renault made its debut recently and will go in to service with eco cab company ClimateCar.

This hands ClimateCar a pair of firsts: They will have the first electric Fluence models in the UK, ahead of their release in Autumn as well as running the first zero emission taxis in London.

MD Nicko Williamson believes that they will be the first in a EV surge: “The addition of the fully electric Renault Fluence to ClimateCars fleet marks a crucial step towards our aim of being the world’s first zero emission car service.” “We are really excited to have partnered with Renault and are looking forward to offering a 100% electric car service to our customers.”

The electRenault is powered by a 94hp electric motor ands will travel up to 115 miles on a single charge.

Talking of charges – ClimateCars will be charging the same fare as normal cabs in London.

There’s news that there is now more car charging points in the UK than cars (which should make getting a top-up easier) – I’m waiting for these electric Black Cabs to hit the streets of London though!