London Drivers to Have Their Speed Controlled via Satellite 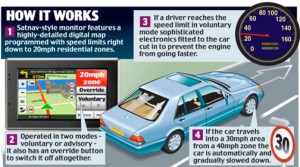 It looks like Transport for London is planning to control the speed of vehicles from the skies!

TFL has just announced a large-scale trial of the Intelligent Speed Adaption system – this uses preloaded road data and GPS to track and slow naughty speed-freaks.

The Daily MailÂ put together the infographic to help explain how the ‘ISA’ system works.

Cars are kitted out with computers loaded with speed limit data for public roads, and are thenÂ monitored via satellite.

There’s two modes of how this system will take over your driving:

Now, before all you drivers start writing your emails to TFL and joining other privacy forums there’s a coupla things you should note first.

Also,Â the system has an override switch so expect this to be almost permanently off in cabs and useless on buses as theÂ moments whenÂ a London bus get’s over 15mph are few and far between.

I still can’t but help feeling a tad uneasy at the thought ofÂ satellite speed control.

WhenÂ you thinkÂ that this tech is possible and thatÂ the government isÂ in on it – it doesn’tÂ exactly fill you with warm fluffy thoughtsÂ does it?