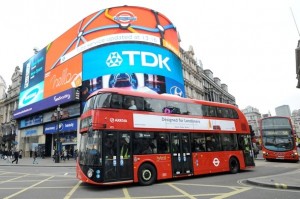 If you are planning to see London by bus this Summer then you’d better be packing an Oyster Card as all buses in the capital are to go cashless.

Transport for London (TfL) bosses say the their move to go to a cashless, Oyster Card-only fleet will save them £130 million. They noted that cash fares are expected to make up less than 1% of journey payments this year. That’s down from 20% 10 years ago.

The move was initially regarded unfavourably as most thought that vulnerable passengers and those in outer London (where Oyster credit top-up spots are less prevalent) would be unfairly treated in the scheme.

However, following a public consultation of 37,000 respondents, TfL will be looking to add more ticket stops in suburban areas in time for the change as well as refreshing the guidance given to all 24,500 London bus drivers in order to provide a consistent service.

TfL will also introduce a ‘one more journey’ allowance, which will permit those that do not have enough money on their cards to pay for a journey still use a bus, putting them into negative credit and allowing them to pay for it once they reach a top-up station. That should stop people getting stranded after waiting for the night bus.

This follows TfL fitting their buses with contactless payment machines a while ago.