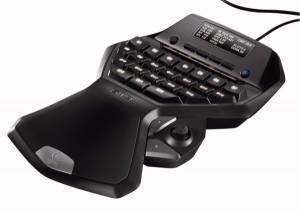 LogitechÂ has announced that Â its G13 Gameboard should be out in a month or so.

RockinÂ a trio of game modes, a built-in 160 x 43 pixel LCD for stats and messaging, 25 programmable keys, and a programmable joystick, Logitech confidently states that the G13

“offers up to 87 ways for you to control your game.”

It also arrives with pre-configured settings for World of Warcraft: Burning Crusade and Call of Duty 4: Modern WarfareÂ as well as other top titles.

You can obviouslyÂ setup custom button-profiles as you please and even create macros on the fly without having to pause your game.

It’s gonna be costing around the Â£60 mark.

It also appears that we could get its big brother as Engadget Chinese hasÂ spotted the G18Â keyboard! 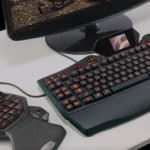 They haven’t got much in the way of specs and tings but they did spot the fast function keys on the left side of the board (some which seem to be numbered G11-G15),Â and the fact that the full board is also packing aÂ tiny display at the center.