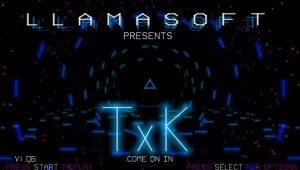 When reviewing a game like TxK, it can be tempting to blast through 10 levels and figure that you get the gist. It’s a retro style arcade shooter, from that Tempest 2000 dude right?

Well it is, but TxK is so much more than that. That’s why I felt like I owed it to not only myself, but to Jeff Minter to experience this as fully as I possibly could before publishing a review. I mean the guy’s an industry legend – and as for me?

Well I just wanted to play his kick ass game some more.

There are 3 modes in TxK, but you’ll be spending most of your time in Classic Mode. There is a whopping 100 levels to blast through here. All are beautiful, surreal and later on, hard. Visually, TxK is a spaced out, psychedelic invasion of your Vita. The visuals are simply stunning and to describe them is near on impossible. They are the visual equivalent of a Wham bar exploding in your face. It’s like someone put a rainbow in a pyrotechnic machine and you get to push the button as many times as you like. Sadly though, you don’t have time to sit and appreciate the visuals, because you’ve got some frantically trying not to die to do. 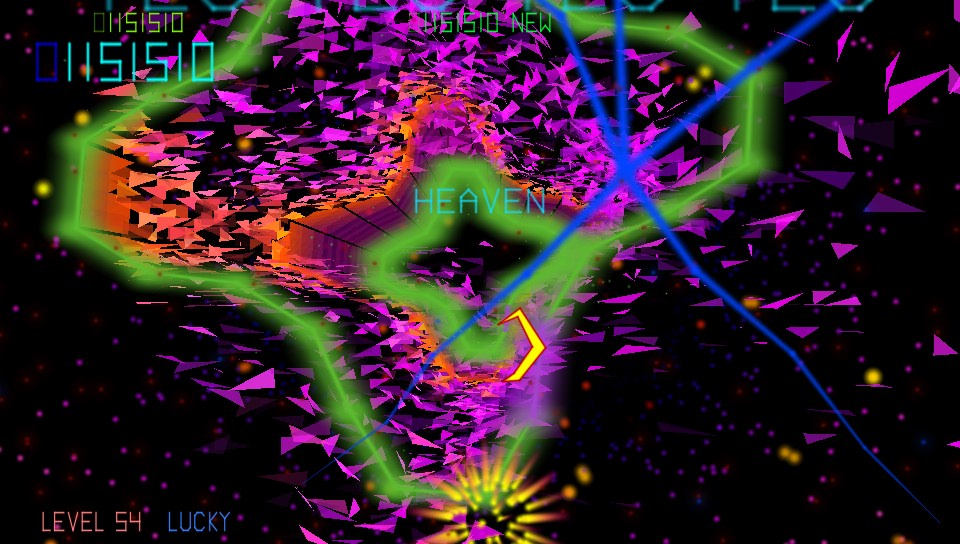 TxK requires you to control a claw like creature/craft/ship along wired surfaces, blasting away at enemies heading towards you. The idea is to keep them at bay, and amongst the chaos pick up power ups. These power ups give you better abilities and more help to deal with the neon covered battle you’re encompassed in. The one that you desperately need as soon as possible is the option to jump.

This means that during your inevitable lack of being able to shoot every single enemy on the grid, you’ll be able to jump off the frame, firing at them from a temporary distance. Your next essential power up item is the AI Droid. At times in TxK, there will be such an overwhelming amount of enemies that you’ll need help.

The AI Droid is your new best friend, climbing along the frame like an intergalactic spider and killing some of the ones standing in your way from progressing to the next level. If all hell breaks loose (which it will) and you’re boxed into a corner, then you can hit the touchscreen to let off a bomb. But be careful – you only get one of these per level.

You’ll take on all sorts of enemies from laser shooting ships to flying cows. Well they’re bulls technically, but it’s still pretty bizarre either way. There is a strange but brilliant sense of humour planted throughout this game, whether it’s flying bulls or the brilliantly titled levels. It’s a good thing too, because you’re going to need that sense of humour around level 60 when you start dying every 0.02 seconds.

Killing everything in front of you is hard enough, but when gravity starts coming into play TxK takes on a whole other dimension. With the grid changing directions and going upside down, your directional controls change with it: left becomes right, right becomes left. At times you’ll feel like you are trying to eat a bowl of soup on a rollercoaster. It’s insanely fun though, and is just one of many reasons that TxK is one of the best Vita games on offer.

Adding to near on perfection is a hard task. But Pure Mode and Survival Mode are welcome additions to a staggeringly great value for money game such as this. You’d pay twice as much, honestly. Anyway, I’ve got to be going now. I’m off to spend some time in the Warp Triangle.

Brighter than a bag of Skittles and just as addictive, TxK is euphoric, handheld genius. Your PS Vita just became PS Vital.